I guess many people search the Internet with the words “android vpn tether”, and there surely are many hits.  The basic problem people are trying to solve is to create a wifi hotspot that sends all traffic over some VPN connection.  Android can by itself create a wifi hotspot allowing your 3G or 4G connection to be shared with other devices over wifi.  Just click the hotspot icon, change the name and password if you like, and off you go.  Your android phone can also make connections to some VPN if you e.g. install Wireguard or one of the several OpenVPN client apps.  That also works nicely.  But how about using the two at the same time.  I think there are some variations of failure, but it never does what you really want:  Share or tether the VPN connection over wifi.  It is – according to many websites – a careful decision by Google, not to allow this.

But go a bit further, and you will find several apps or simple scripts, that will allow sharing a VPN connection, and which all require your phone to be rooted.  A script like:

is found in lots of places (it assumes your VPN tunnel is on tun0, which typically is the case for OpenVPN), and it is often told that it does the trick for you.  I believe many of the available apps do the same behind the scenes. And it is correct, if you start a VPN connection, start the hotspot, and run this script as root, your wifi connection is shared.  But does it “work”?  Have you tried using connecting to that shared hotspot from another device?  Chances are it doesn’t work.  It didn’t work for me.  But there is a solution or a workaround, which I’ll describe below. 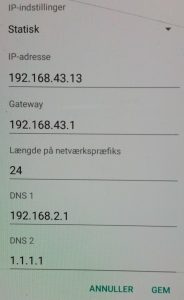 So a summary of the steps are

A final remark is that I typically get throughput performance of at least 10Mb/s, often 20Mb/s download and somewhat less upload, while ping times typically are in the 30-40ms range.

It should also be mentioned that you can create a very similar setup – that is a portable wifi hotspot over a VPN connection using the GL-MiFi from Shenzhen based GL-iNet.  However, due to the low performance CPU, the best possible throughput is limited to around 5Mb/s.